COVID-19: How are valuations affected in the era of the pandemic?

The worldwide spread of the Covid-19 has led to an unprecedented shock in the economy and the financial markets and it could be characterised as a material adverse change in M&As. In these confrontational times, companies, investors and finance professionals have to reassess and reevaluate the concepts and inputs they take into consideration when performing equity valuations.

With an ever-increasing number of countries currently in a lockdown and many more supporting social isolation, business activity has been halted for the most part, lay-offs have surged in multiple industries and the global equity markets have been plummeting at an alarming rate. Furthermore, the Covid-19 outbreak could be characterised as a material adverse change (MAC) in M&As and act as a deal-breaker affecting the deal making process overall, in both fundamental and practical terms.

Uncertainty regarding the future of the global economy is over the roof, as from this standpoint we cannot assess the depth and duration of the impending crisis. Governments and Central banks around the world are taking steps to pump business confidence, however monetary policy measures seem to fall short, while only time will tell whether fiscal policy measures will be adequate to make up for the sharp decline in the global GDP.

In the aforementioned context, it is crucial that companies update their business plans in order to incorporate the financial impact of Covid-19.

As a first step, key figures such as revenue and operating margins, should be forecasted for the short term, based on management best estimate assumptions regarding the effect of the crisis in the company’s operations. Subsequently, it should be determined, how the industry in which the company operates, as well as the company’s standing within the industry will be affected in the long term.

Other operational considerations that will shape a company’s prospective financials include the following:

Apart from the implications the above would have in the company’s results, it is equally important to estimate how their shaping translates in terms of capital expenditures and working capital needs. Further considerations in updating the business plan include identifying the available sources of funding as well as actions that would contribute to maintaining and improving the cash conversion cycle. All these matters, contain a level of uncertainty, the effect of which should be reflected in both the cash flow projections and the discount rate calculation.

Despite overall impact arising out of abrupt change in fundamentals, market factors also severely affect valuations. Determining the appropriate discount rate is challenging as it is quite difficult to incorporate the uncertainty hovering over the markets and investors’ current sentiment. Market participants find it harder to accurately price securities across the asset class spectrum with market volatility surging.  VIX[1], a.k.a. “the Fear index”, is recording ten-year highs standing at over 60 points, even days before the W.H.O. declared Coronavirus outbreak a pandemic on March 11.

As far as the risk free rate is concerned, it is rather insightful to look into the US 10 Year Treasury rate as well as the German 10 Year government bond yield, figures commonly used as a proxy for the risk free rate.

In the midst of the imminent crisis, investors seem to have turned their focus on low risk securities, increasing the demand for government bonds and pushing the respective yields downwards. Specifically, after the first emergency cut rate by the FED on March 3, US 10 Year Treasury rate reached an all time low of 0,54%, on March 9. This is considered a significant decline, when the respective rate stood at 1,92% on December 31. At the same time, the German 10 Year government bond yield is tracking the US Treasury rate, extending its fall up to 67 bps lower than the respective yield on December 31.

By the day after Covid-19 was declared a pandemic (11 March 2020), global equity markets had already priced the financial impact of the crisis with almost all major stock indices collapsing in a matter of a few days. S&P 500 plunged by 26,7% at 2.481 points, compared to  3.386 points in February 19, marking this as one of the sharpest declines in the index’s history. European markets followed a similar trend, with the DAX and EURO STOXX 600 both plummeting by 33,6% compared to year-end prices. The aforementioned ever-changing pace makes equity valuations very sensitive on the date they are conducted. Equity valuations performed by the end of February were already obsolete a few days later, while we cannot assess accurately the impact on market values throughout the Covid-19 outbreak.

This unexpected plunge in prices and the implied uncertainty in the markets should be reflected in the calculation of the discount rate. In order to assess the level of increase in the market risk premium we used Dr. Aswarth Damodaran’s approach, according to which, Total Equity Risk Premium consists of Mature Market  Equity Risk Premium (ERP) plus Country Risk Premium (CRP) and therefore study the impact on each component separately.

Initially, it would be rather insightful to look into the historical implied ERP on a monthly basis as reported by Dr. Damodaran. As we are still in the middle of Covid-19 crisis, it is of importance to compare current trend in ERPs and market volatility with the respective figures during the global financial crisis of 2008, in order to assess the potential increase in the market premiums over the near future. Even though the two periods are by no means directly comparable to each other[2], market risk premiums during the 2008 crisis could be used as a proxy as it is the only period in recent history when the global economy took a hit of that caliber.

According to Dr. Damodaran calculations, the ERP stood at 4,22% on September 2008, reaching its peak at 7,68%, on March 2009, implying a maximum extra risk premium of 3,46%. As for current data, in February 2020, before the Covid-19 outbreak in the developed world, ERP stood at 5,24%, subsequently increasing to 5,69% in March and 6,16% in April. Although the exact magnitude and duration of the crisis cannot be accurately measured at the time, the market risk premium in the following months could rise up to 8,70%, indicating an extra premium of 2,54% compared to April 2020 data.

Therefore, examining the movement of the VIX index in comparison with the implied ERP during the 2008 crisis could give us a glimpse of the potential movement of the ERP in the coming months or even the timing of its peak. During the crisis of 2008, the VIX index acted as a leading indicator of ERP, with the latter reaching its peak a few months after the former did. To the point that the aforementioned correlation might hold, so long as the VIX index is on the rise, the ERP would continue to increase proportionally with a lag. Nevertheless, due to the different nature of the this crisis, we cannot argue in favour of the stability of the aforementioned relationship.

Overall, stocks and bonds exhibit different characteristics as for their performance in times of crisis. By looking into the movement of the 10 year US Treasury Volatility index (TYVIX) we can conclude that it resembles the movement of the VIX index. Nevertheless, the level of TYVIX as well as the magnitude of its deviations are at a lower scale, as expected. As a result equites are indeed impacted more severely by the crisis and thus the computation of the market risk component of the discount rate should compensate for this uncertainty. 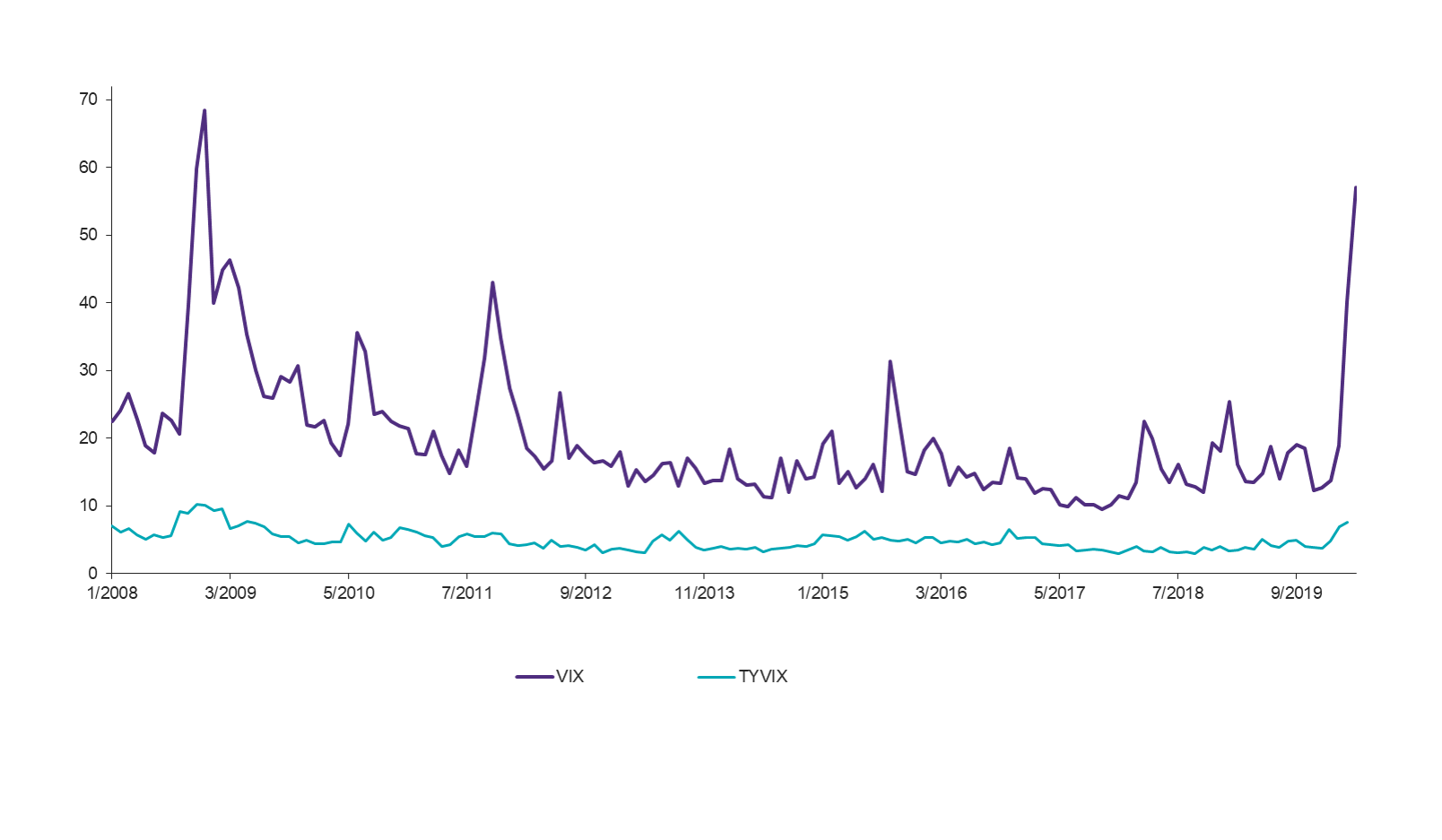 Αs far as Country Risk Premium (CRP) is concerned, this should also be considered, however it will take longer to assess the effect on each country’s public finances and economic performance, leading to possible downgrades in credit ratings.

Due to the nature of the Covid-19 crisis, the various industries are affected disproportionally, with sectors such as tourism, transportation and retail, to name a few, taking a bigger hit than others. On the other hand, sectors such as medicine and non-cyclical consumer goods seem to be the only ones on the rise in these adverse times. When incorporating company specific risk in the discount rate, industry related risk should be reflected in the computation of the respective company specific premium in the short term as beta factors take time to adjust.

The collapse in the financial markets will certainly affect relative valuation approaches as well. With market capitalisations plummeting, relative valuation approaches suggest decreased market values compared to even a month earlier for many industries. At the same time, recent transactions cannot be considered comparable when market conditions have shifted so drastically. Furthermore, it should be considered that the uncertainty in the market has decreased the marketability of private companies and larger discounts for lack of marketability should be accounted for.

Consequently, as the pandemic is still in outbreak, uncertainty shifts valuations as well. Market conditions are constantly changing, recent valuations rapidly become obsolete and no one can predict the conclusion of this crisis. Under these conditions, valuation professionals should:

[1] The CBOE Volatility Index (VIX Index) is a calculation designed to produce a measure of constant, 30-day expected volatility of the U.S. stock market, derived from real-time, mid-quote prices of S&P 500 Index call and put options.

[2] The financial crisis of 2008 constituted a credit crunch crisis associated with the banking system affecting mainly the demand side of the economy, while Covid-19 is a public health crisis with immediate and severe implications in the economy affecting both the supply and the demand, as a result of interruption in the business activity. 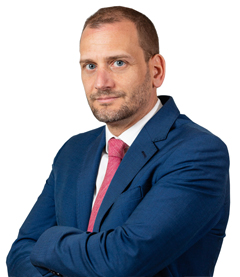